Git and GitHub are preinstalled, as well as Mercurial and SVN. You can open a Terminal window to access them from the command line. The Tools > Git menu includes options for using Git.

You can also configure your .codio file to create a Run menu from which you can access common commands in the Codio IDE. See Customize Run Button for more information.

If you are new to Git, refer to the following to get started:

Use Git without remote repos¶

You can use Git commands in your Codio project without using a remote repo, providing more collaborative capabilities and comprehensive version control. However, you can add a remote repository, such as GitHub (recommended), if you want to save your code in more than one location as a back up.

GitHub let’s you browse around a repo but it’s not the same as using an IDE. Codio gives you a great way of viewing any GitHub (or Git) repo. For web apps, you can even run and preview in Codio.

You can include a link to your project in the project readme.md file that initiates the creation of a project and imports it from the repo into the users Codio account. When you make changes to your repo, the changes are automatically shown in Codio since a brand new Codio project is created whenever the link is clicked. If a project with the same name already exists, users can change the name on the project creation page. 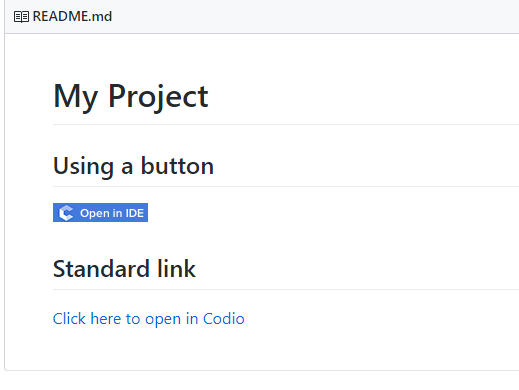 To create the link in your GitHub README.md file (or anywhere else for that matter), enter the following:

To specify a specific branch (for example, you have a demo or GitHub Pages site that you want to load into Codio), enter the following:

To find the appropriate stack to use with your repo, go to Stacks in the Dashboard, choose the stack to be used, and click Use Stack. In the address bar, you can view the stack version ID to add to your link in the readme.md file.

You can use any method for linking to Codio but we recommend using the following images:

To manually import a Git repo into Codio, follow these steps:

If you are cloning using SSH, you must have already added the Codio SSH public key as described in Upload SSH Key to Remote Server.

If you have code in Codio and want to create a new GitHub (or other remote) repo, follow these steps:

If you’re using GitHub, use the SSH url rather than https. Also make sure that your Codio public key is uploaded to your GitHub account or repo settings as described in Upload SSH Key to Remote Server.

Whenever you want to see the Git status of your project, enter git status. Initially, nothing will be returned until changes are committed.

Codio uses Git by default and if you import a project from a Git repo, all the existing files are ready to be tracked. Tracking means that Git knows about them. If you add a new file, Git does not know about it and needs to be explicitly told:

A staged file is one that is tracked and is ready to commit to the repository. Once you run git add, the file is being tracked and staged. However, if you modify a tracked file, the modifications are not staged. To stage the file, rerun git add.

Committing means that you want to add your staged, files into the repository. You can commit using one of the following commands:

The commit message is important as it allows you to see what general changes are included in the commit. For example:

git commit -a -m "added test.txt and modified some stuff" and get

If you run a git status, you can see that everything is clean and up-to-date.

You can revert your code back to an earlier commit to roll back your changes. Use one of the following commands to revert:

Push to a remote repository¶

If you have a remote repository configure, commit your changes using the git push origin master command, where: - origin - is the name of the remote repo. - master - is the name of the branch. When you create a new Codio project, a master branch is automatically created and appears in brackets at the top of the file tree next to the project name.

You can view your pushed commits in the GitHub repo.

Pull from a remote repository¶

If others are working remotely on the same code (not in Codio), they are also pushing their code to the GitHub repo. Run the git pull origin master command to pull in changes from the remote repo and automatically merge the code.

When you pull in from the remote, you may get a conflict warning. This occurs if someone else has modified code in a way that Git cannot automatically resolve it, usually because you have been editing the same code.

You can minimize conflicts by committing small changes and pulling from master often.

When you create a branch, you are creating a new area to code. You then merge another branch (usually the master branch), into your new branch. From this point on, you can do whatever you want (add, commit, push etc) without impacting the master branch on any other branch. For more information about branching, see http://git-scm.com/book/en/Git-Branching-What-a-Branch-Is.

Use the following commands for branching:

It is recommended that you switch to your master branch and pull in changes from the remote, and then switch back to your working branch and merge changes. This practice will minimize conflicts.

You can switch branches using the command line interface or from the Tools > Git > Switch Branch menu.

You can see which branch is active by looking in the file tree. The top level item is the project name and the current branch is in brackets.