The script must execute within 3 minutes or a timeout error occurs. There is a maximum size for the feedback that can be returned of 1Mb. If this limit is exceeded, the message Payload content length greater than maximum allowed: 1048576 will be returned.

If you are using an LMS platform with Codio, be sure to enter a percentage value in the Grade Weight field to maintain compatibility with LMS gradebooks. This value is then transferred into your LMS gradebook once you release the grades.

If you store grading scripts in the .guides/secure folder, they run securely and students cannot see the script or the files in the folder. Only instructors can access this folder.

You can access student scores for authored content-based, auto-graded assessments. You can get both summary data and data for each assessment. This data is in JSON format and can be accessed in the CODIO_AUTOGRADE_ENV environment variable. The following is an example of the format of this data:

An example of participation grading:

You can regrade all student’s assignments that have already been auto-graded from the Actions button on the assignment page.

Test and debug your grading scripts¶

Codio provides the ability to test your auto-grading scripts when creating your project, this should be done before publishing your project to a course. Once an assignment has been published to the course, any changes made to the assignment’s source project are not automatically reflected in the published assignment. As a result, if you include your main grading logic in the project and the script has bugs, you cannot fix the bugs without deleting the assignment. All student data is lost. However, if all your scripts are stored in the .guides/secure folder, you can update and test the scripts and then publish the new version.

You can also use a simple bootstrap launcher that loads and executes the script from a remote location so that you can edit and debug independently of the Codio box. The following example bash script shows a Python script that is located as a Gist on GitHub. This script might be called .guides/secure/launcher.sh.

It is important that this file is stored in the .guides/secure folder. You then specify the full filepath .guides/secure/launcher.sh in the Set custom script path field in the assignment settings.

It is now possible to debug the Python script and fix any bugs that you may have noticed once students have started work on the assignment.

Test your script in the IDE¶

You can also test your auto-grading script in the Codio IDE from the Education > Test Autograde Script on the menu bar. This option allows you to specify the location of your auto-grading script and run it against the current project content. It also allows you simulate scores attained by any auto-graded assessments located in the Codio Guide and select which autograded assessments to test. 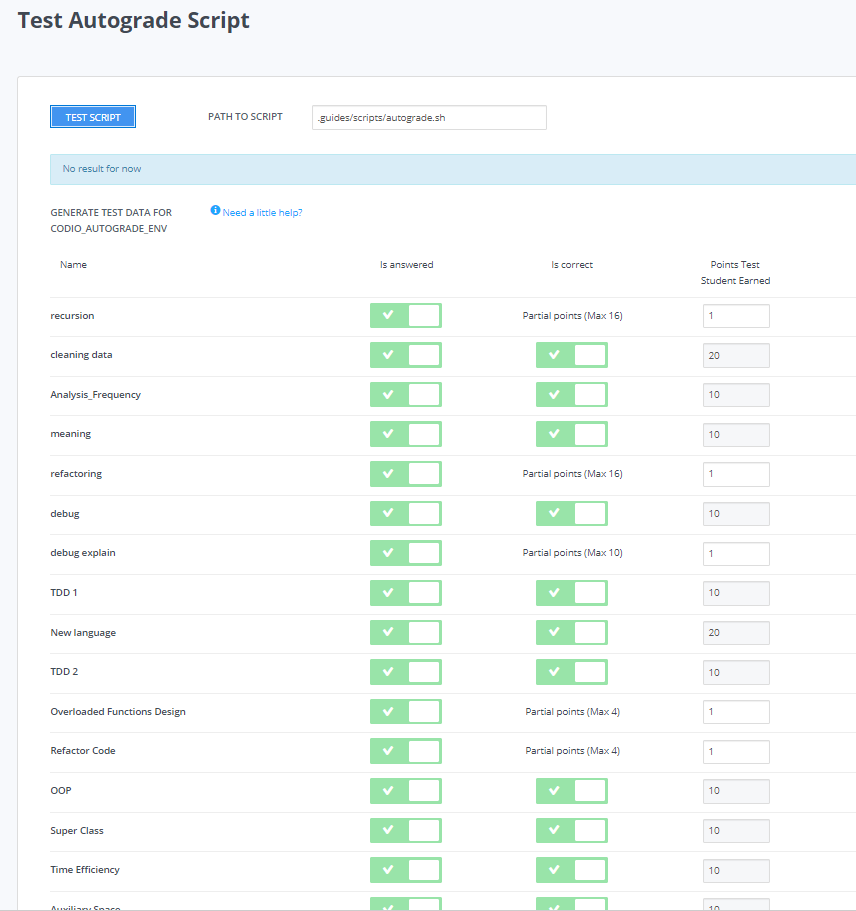 Be sure to take the following into account when using this feature:

Below is an example Python file that can be loaded by a bootstrap script.

The only code you need to modify is near the bottom. The other functions are helpers and can be used for any test in any assignment.

Below is an example bash script file that can be stored in the .guides/secure folder:

Codio provides a Python library to facilitate reporting points from your custom scripts. There are four functions in this library: send_grade, send_grade_v2, send_partial and send_partial_v2. Partial points are only used in Advanced Code tests, see Allow Partial Points for more information about setting up partial points.

In order to use this library you need to add the following code to the top of your grading script:

The calls to use these functions are as follows:

grade - Should be the percent correct for the assessment.

grade - Should be the percent correct for the assessment.

feedback - The buffer containing the feedback for your student - maximum size is 1 Mb.

format - The format can be Markdown, HTML or text and the default is text.

extra_credit - Extra points beyond the value for doing this correctly. These do not get passed to an LMS system automatically, just the percentage correct.

The V2 versions of the grading functions allow you to:

If you don’t use the send_grade functions, this URL (passed as an environment variable) can be used:`CODIO_AUTOGRADE_V2_URL`

These variables allow POST and GET requests with the following parameters:

With the V2 versions of grading, the script output is saved as a debug log. This means that all information you want to pass to students must use the Feedback mechanism.

If the script fails: